My, How Things Have Changed 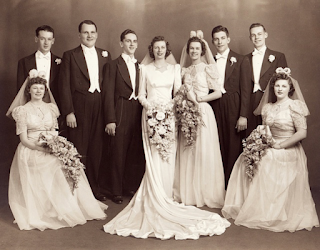 Funny, isn't it? When the bride and groom above got married, it was assumed it would be the first time either one of them would have sex.

When the couple below married, it was assumed that both had dated others before, slept with those others, maybe lived together them, and broke up, but now they were giving up all sex with other people to be true to their marriage partner. 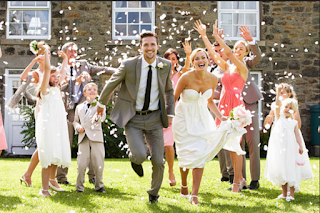 The only way a modern couple could buy this premise was to invest their partners with almost supernatural qualities. He or she had to be The One. Each would keep the other safe, be their best friends, offer continuity and adventure, provide unconditional love and support, at the same time providing adventure, novelty, and fulfilling sexuality with excitement and edge. And this would last forever.

Many years ago, when marriage was essentially an economic union, love was not a part of the deal. When you married you increased each other's net worth with a dowry or land or estates, along with providing more people (i.e., in-laws) to handle the work. Yes, it's true that men were almost expected to have affairs, but women, if careful, could do the same. And it's true that some couples might actually learn to love each other, but it wasn't the goal. And that's the way marriage went for hundreds of years.

The modern concept of marriage made it more likely for partners to be disappointed, because it is hard to be all things to someone else. And when they're disappointed in this world, they are more likely to seek a way out. So in a way, it can be said love has dealt marriage a serious blow.