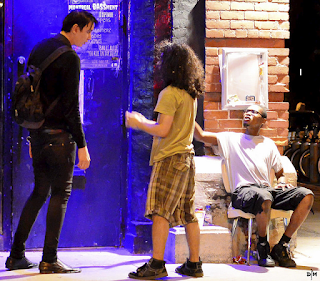 I must have seen umpteen TV programs where people with opposing viewpoints sit down and try to talk about an issue. But what really happens is that each person brings their version of the ‘truth’ to the table with the goal of persuading the other person to accept it as gospel. Now, when everyone is trying to do that, no one is going to succeed. More importantly, no one is going to hear. Because in order to accomplish this feat of getting the other person to accept your version of truth, you usually resort to talking loudly, talking over them, disrespecting them, demeaning them, and generally trashing any ideas they may have. It’s a lose-lose situation.

So how can we talk to each other? That requires us to go beneath the positions that most people present as their argument. All of us do this. Take this situation. John Doe works a late shift at the factory, getting home each night at 1 am. He likes to unwind by cracking a beer and putting on some Lady Gaga music. After about an hour, he’s ready to hit the sack. But he lives in an apartment underneath Madonna Maternal, who just had her second child a month ago and is trying to raise two toddlers on her own. She works the day shift at a Taco Bell while her mom babysits the kids. John’s music shakes the floor of Madonna’s home, often waking the kids and making nights fairly miserable for the mother. During the day, while John’s trying to sleep, there’s a lot of activity in Madonna’s apartment, especially with Jolie, her older child, who can walk now and likes to do a lot of it on the uncarpeted wooden floors.

If John and Madonna run pretty much to type, one will confront the other about the “noise” in their apartment and how it’s affecting life for the complainant. Let’s say Madonna complains to John. John takes umbrage, pointing out that what he does in his home is his business and telling Madonna to suck it up. Madonna may become enraged, and plot how she can make more noise in the morning to disturb John’s rest. And on and on. You get the picture.

The key to being able to talk to each other in these situations is to find neutral language to use when having that conversation. That is, Madonna needs to say something like, “I’m concerned about the sounds coming from your apartment late at night. Those sounds cause my floors to vibrate and wake the kids.” John is then free to talk about how he needs to unwind after work and the music helps him relax. Once the ‘whys’ are out on the table, they can both seek ways to resolve the issues. Madonna could ask if John could use headphones at that hour of the night, so he could still listen but the family upstairs wouldn’t be disturbed by it. And John might suggest a rug on the floor over his bedroom, so when the little tyke is running all over the apartment, her dainty footsteps would be muted and he could sleep more soundly.

This process is called seeking the needs that underlie the positions. You need to find why someone is taking a particular position before you get into a fight with him or her. What you’re looking for are ways to state those needs using nonjudgmental language, which makes it possible for people to talk about things.

Here’s an example. Two politicians were discussing the abortion issue. One took the position that abortion was morally wrong and unacceptable, while the other felt that women should have a choice in these situations. There was no way one would come around to the other’s point of view, and this made further conversations between them impossible. But then one politician started asking the other why they felt the way they did. That is, what need did each politician’s position fulfill for them. And they found one they both agreed upon: both pols wanted to decrease the number of teenage pregnancies. So they were finally able to have a conversation about what steps could be taken to resolve that issue.

When you’re having difficulty talking to someone, start asking why they feel the way they do and be sure to reframe their feelings in nonjudgmental language. Then see where the conversation goes!
creative resolution divorce divorce mediation needs positions resolving arguments wants