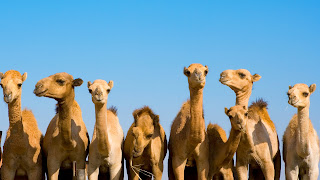 Years ago, a merchant know for his sagacity was traveling through the desert to his home town. He chanced upon an oasis where other travellers had gathered and turned his camel toward it, in order that the beast might be watered and fed. Upon arrival, however, he found the other travellers were in a frenzied state. It turned out that they were members of the same family, returning from burying the patriarch. This sheik had three sons, and it was clear that the eldest was angry at the youngest two and they were angry in turn with each other.

When the merchant enquired what was going on, one of the late sheik’s wives told him that the sons had only just heard what was in their father’s will. The man’s fortune consisted of the camels tied up at the oasis, and he had apportioned them thusly: half of the camels were to go to the eldest son, a third to the middle boy, and a ninth of them to the youngest (who was not his father’s favorite.)

Unfortunately, the old sheik owned only seventeen camels, and the fighting among the brothers focused on how they were going to honor their father’s will, because half of 17 is 8.5 camels, a third of that number is 5.67, and a ninth of the camels would give the youngest brother 1.89 beasts. So the eldest son was arguing that he should get 9 camels because he was the favorite, which would mean the others get less. There seemed to be no way to resolve it.

Just then, the merchant stepped forward. “Allow me to be of some help,” he said. “Take my camel and put it with the others.” The sons couldn’t see how that would help, but they did as the merchant said.

Turning to the middle son, the merchant said, “Your bequest was one-third of your father’s camels. One-third of 18 camels is 6 camels. Take them now.”

Finally, talking to the youngest son, he said, “You are due one-ninth of the sheik’s camels. One-ninth of 18 camels is 2. Take your two camels.”

Once the sons had taken their camels, they stared open-mouthed at the merchant, because there was still one camel left, the merchant’s own animal. The visitor had indeed distributed the sheik’s 17 camels as he had wished: 9 to the oldest son, 6 to the middle boy, and 2 to the youngest.

What does this have to do with mediation, you ask. I will tell you. Most of the problems that become the thorniest between couples, business partners, and neighbors involve dividing things up. People in the thick of a dispute usually don’t think creatively. It is often a third party who can see a clearer way to make division easier. And often, as in the case of this merchant, third parties can act as catalysts, finding that clearer way by injecting themselves into the problem and then withdrawing when the problem has resolved.

So if you are stuck in a conflict that seems impossible to resolve, start looking for your 18th camel!
creative resolution impasse out-of-box thinking resolution